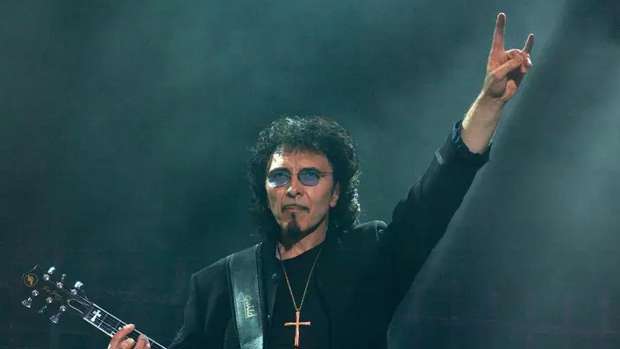 On February 19th, 1948, Tony Iommi was born. We all know him as the guitarist for Black Sabbath but to celebrate his birthday, here are ten things you might not know about him:

1. Tony almost always has a mustache because as a child, he fell and cut his lip, causing a scar. Kids called him “Scarface” so as soon as he could, he grew facial hair to cover the mark. Interestingly, the reason Iommi fell was because a neighborhood bully who collected spiders was chasing him with some of the eight-legged creatures and Tony was scared.

2. Before becoming a professional musician, as a teenager Tony worked as a welder in a factory. On his last day of work, he had an accident that severed the tips of his ring and middle fingers on his right hand, which the left-handed rocker used for fretting.

3. In 1968, Tony left Sabbath’s forerunner, Earth, to join Jethro Tull, but he returned to his original band in 1970, after they came up with their new name, and with them Iommi recorded their debut album, Black Sabbath.

5. Tony loves cars but they almost got him killed. In his late teens, just after he got his license, he bought a sports car that he then crashed into some trees and wrecked. He somehow survived and went on to buy a Rolls-Royce, a Lamborghini, a Maserati and more.

6. It took until 2000 for Tony to put out a solo album. That year he released Iommi, followed by his second solo set in 2005,Fused.

7. Tony was almost hired to do the soundtrack for 1984’s A Nightmare on Elm Street. He read the script, met with producers and even wrote a song for it, but his manager asked for a high fee since the job affected his Sabbath work and the project fell through. The track Tony wrote would go on to be the song “Nightmare” on Sabbath’s 1987 LP The Eternal Idol.

8. Sabbath’s 12th album, Seventh Star, was originally a Tony Iommi solo effort, but his record company wanted to sell more copies so he had him use the Black Sabbath name instead of his own.

9. In the mid-80s, Tony was engaged to rocker Lita Ford. He co-produced her album,The Bride Wore Black, but it never came out. Lita was the one who called of the engagement.

10. Tony is the only member of Black Sabbath to appear on every one of the band’s albums.