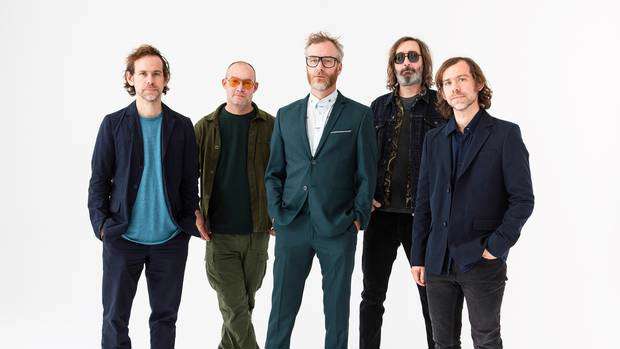 The National's eighth record sees them breaking up with their sound. This probably sounds a bit more dramatic than intended or indeed warranted. The band haven't dropped an album of d-floor bangers, embraced hip-hop or gone pop. No. What they've done is far more interesting than that.

On I Am Easy to Find the band enlisted a who's who of guest vocalists, including Sharon Van Etten, Gail Ann Dorsey and Kate Stables, a dazzling array of guest musicians - both traditional and classical - and the Brooklyn Youth Chorus to come in and star on the songs.

This makes it sound as if it's going to be a full-bodied, crammed indulgence of an album. Rest assured, it's not. The record is almost baffingly sparse and admirably restrained, despite being rich in sonic decorations. As long as you don't count its one-hour running time . . .

There's no escaping it's a downer of a record, continuing the moody and maudlin vibes and light electronic explorations seen on their previous album, Sleep Well Beast.

But where this one differs, and what makes is so good, so enticing and such an exciting record is that vocalist Matt Berninger spends a lot of time ceding the microphone. That's right, the voice of The National is not always easy to find.

Instead, it's the female vocalists who, more often than not, take center stage. This breathes a new life and perspective to all the musings on breakdowns and break-ups and life and loss and weary resignation and all that other messy stuff that the lyrics, some written by Berninger's wife, are preoccupied with.

It was a brave choice for the band and one that has more than paid off. It's sentiment hitting harder than ever with a gravitas that Berninger's gruff baritone alone could never give.

Initially underwhelming, eventually startling in its beauty and ambition. It's a slow-burn album that gradually reveals itself and its rich sonic detail to leave you with a lot to uncover and unpack as you're dragged into its singular world.