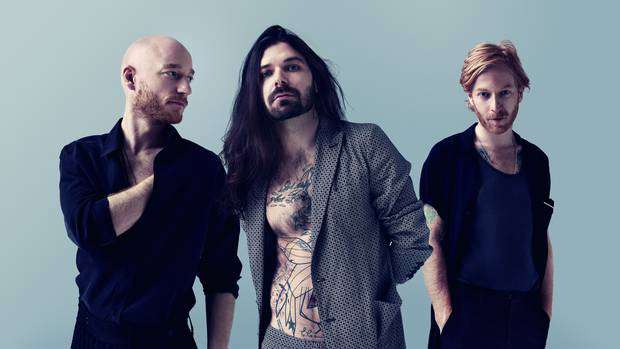 Scottish rock trio Biffy Clyro are getting back on the road with their first show of 2018 in Auckland. TimeOut caught up with twin brothers Ben and James Johnston.

TimeOut: Your New Zealand show here next week is your first performance for 2018. What have you been up to during your time off?

We've had a little bit of time at home working on some new music, but there's nothing quite like getting in front of an audience. Our last trip to New Zealand was really amazing. We made a good connection to the place so I'm hoping to keep that going. When we've been on the road for too long we always want to get home, and then when we're home we just want to get on the road. It's complicated. We're quite thankful to be home for a little while now. Waking up in the same bed every day is a bit of a luxury for us.

TimeOut: You're twins, you're in a band, you clearly have to spend a lot of time together. Do you fight?
James: Ben and I get along great. If we do fall out and have a disagreement it doesn't last long. It's the differences that make us work well together. We're reasonably different people, but when we come together there doesn't seem to be problems. Ben, are you shaking your head?

TimeOut: Do the pair of you ever gang up on (singer) Simon Neil to get your own way?
James: Simon counts for two. That's probably how things work, to be honest. There's never been a ganging up that's 'the twins against Simon'. Things will fall in different ways. Maybe Ben and Simon will agree on something and I'll go along with it or Simon and I feel a certain way. Simon's the songwriter and the driving force of the band so it would be a bit rich if we just said no all the time. It's a marriage of three people and we've been doing it for 20-odd years. There's a shorthand and a dialogue and a way of communicating (between us). A lot of things go unsaid and maybe that's good or bad but we make things work and we're still here doing it and enjoying it.

TimeOut: If you look at festival line-ups and streaming charts, hip-hop and pop is dominating rock at the moment. But you guys are still thriving. Why?

Ben: That's a tough one to put a finger on. We just try to make music that makes us happy. All you can do is be honest and hope that people like it.

James: The energy a rock band has is very difficult to match for a hip-hop group. Kanye (West) has a really great and unique show but it doesn't have the energy of the Foo Fighters or us. I listen to a lot of hip-hop but for me it doesn't have quite the same energy.

You've only been to New Zealand once in 20 years. How come?
Ben: It's always somewhere we've wanted to come, but a few circumstances have got in the way. We want to get a real feel for the country, and I don't think we got to spend enough time there. We've only been once. We're going to remedy that and try to see you a bit more often.

Lastly, how often do you get asked what a Biffy Clyro is?
James: The answer is we never get asked that question.

LOWDOWN
Who: Biffy Clyro
Where and when: Performing at Spark Arena on Tuesday night
Also: New album Ellipsis out now