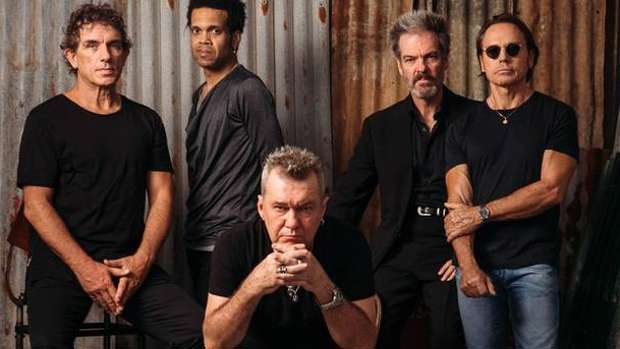 Cold Chisel frontman Jimmy Barnes believes his old hellraising antics endeared Kiwi audiences to the band and kept them coming back for more.

The Aussie rock legends fondly recall their early shows on our shores, but lead guitarist Ian Moss explains tension was in the air before they even took the stage for their infamous performance at Sweetwaters 1981.

"The first time we played Sweetwaters we were on the very last night and three-quarters of the crowd had left," Moss tells TimeOut during a hectic day of press at Sydney's New Zealand expat capital Bondi Beach.

"We were on a much better spot the second time and we headlined one night. That one, we'd just arrived at the gig in the evening and The Angels were on.

"I wandered up side of stage to have a look and the next minute I see a glass smash across [lead guitarist] Rick Brewster's face. I thought 'shit – are we going to get this too?'"

Crowd trouble continued to erupt throughout Cold Chisel's set before a severely inebriated Barnes decided to get amongst the drama – a reckless streak he believes helped the band earn the audience's respect.

"Everyone was terrified of the bikie gangs and there was a big fight," Barnes recalls.

"Somebody had given me too much to drink and I didn't care at all and I jumped in the middle of one of these brawls. And I was right out of my f***ing league but it endeared us to the crowd and they came back to see how I was going to survive the next time."

The group is currently touring in support of their new album Blood Moon and will return to our shores for a one-off sold out concert at Tauranga's Wharepai Domain on February 5.

Walker, the band's deep thinker and the man behind some of their biggest hits including Khe Sanh, Cheap Wine and Saturday Night, has a lot of love for Aotearoa and appreciates the fact our country is entirely unique to his homeland.

"Kiwis are different to Aussies in every way," Walker says.

"I love the place. In Sydney a high proportion of my friends are Kiwis and I have holidayed there extensively with my family.

"And of course I have a lot of friends over there. I could live there - Picton would be top of the list."

The band also has close ties to New Zealand through Moss' wife Margeaux Rolleston who hails from Rotorua.

"Trips to New Zealand were always amazing," says Walker. "The first couple of times we went over there we were playing in little clubs.

"We played the Logan Campbell Centre with Hello Sailor playing with us. A couple of those guys showed me all over Auckland which was a pretty wild town in those days.

"On tours following that we'd hit Sweetwaters and we toured extensively right through every town in New Zealand with INXS supporting when they were a young band."

Worldwide success always eluded Cold Chisel but iconic frontman Jimmy Barnes appreciates the fact New Zealanders were able to relate to their songs, many of which spoke about issues concerning Australian society more than 40 years ago.

"Generally success comes from hard work and we were hard working but we never spent a lot of time touring overseas," explains Barnes.

"It was at Sweetwaters at Ngaruawahia and we connected there. It was much harder maybe because of the language barriers to connect in Europe.

"But we were lucky that we had New Zealand and Australia that we connected with."