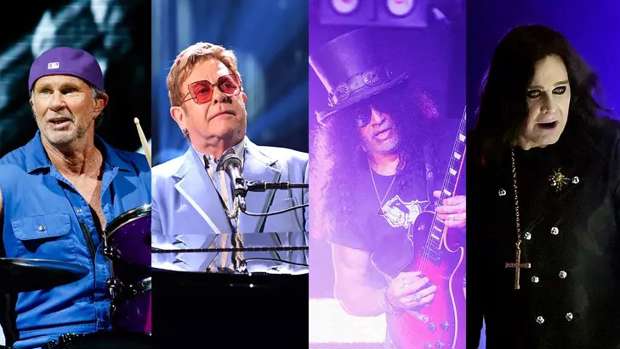 The song Ozzy Osbourne recorded last year with Elton John is, in fact, the title track on his upcoming Ordinary Man album, due next month, according to Red Hot Chili Peppers drummer Chad Smith, who played on the new LP.

Sharon Osbourne revealed the news the other day that Ozzy and Sir Elton had done something together, but it was unclear whether the bit of new music was finished and in what fashion it would be released.

In a recent conversation on SiriusXM with Lyndsey Parker, Smith answered everything. He explained that Elton also played piano on the song "Ordinary Man," which he described as a "more mid-tempo-y" track that showcases Ozzy's Beatles influence.

Producer Andrew Watt "had this little piano-idea thing, and we made it into this song, and it's epic," Smith continued, before making another revelation. "It's so epic there's two Slash solos!"

Ozzy's band for the entire album included Smith on drums, Watt on guitar and Guns N' Roses' Duff McKagan on bass. So when it came time to find someone to play keys, Smith says he suggested Ozzy keep aiming high.

"'Let's get the Rocket Man! Do you know Elton?'" Smith recalled asking. "'Yeah, we know Elton.' They know everybody — all the English rock royalty. Andrew and I went down to Atlanta, where Elton John lives when he's on the East Coast...and we recorded him, and he plays piano on the song, and he [does it] beautifully, of course. And then we're like, 'Why don't we have him, like, sing a verse?'"

Smith enthused that the result is "f---ing awesome," because it depicts two rock icons "that have been through it all" singing the lyric, "I don't want to die an ordinary man."

He recalled Elton saying, "I'll do anything for Ozzy. I love Ozzy."

To up the significance of the song, Smith says he and Watt went to Abbey Road Studios in London to add a string section and a choir to it.