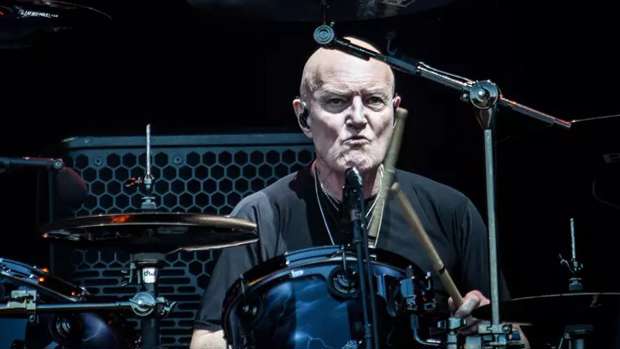 Drummer Chris Slade has never had an ill-word to say about his on-again-off-again bandmates in Australian rock icons AC/DC, but playing in the iconic band isn't without its complications.

More than once over the past 30 years, Slade has been left to wonder whether or not he's still in the band. But when it comes to finding new work, being an AC/DC alumni actually means you have to hustle a little more for the next gig, he says.

"It can be a double-edge in that it's fantastic to be in AC/DC, absolutely brilliant. Eighty thousand people a night — so much fun on stage and the audience just goes crazy...It's a privilege to play in that band," Slade told Linea Rock in a recent interview. "But the last time I left AC/DC, nobody called [me] to work in their band. So that's where the double-edge comes in."

Slade isn't quite sure why that is — it's certainly not his drumming. Slade provided the backbeat for AC/DC's hit 1990 album, Razor's Edge, and he's toured the world with the band several times over.

His best guess is that other band leaders assume that someone coming off a stadium tour is too expensive for studio work or another live gig.

Slade was in AC/DC from 1989 - 1994. He rejoined the band in 2015 for the 'Rock or Bust' tour. In the intervening years, Slade was a member of Asia and a handful of other collectives, though his main project has been his own Chris Slade Timeline band.

AC/DC has laid low in the years since its last tour. But for all we know, Slade might still be in the band (though recent evidence suggests that whatever the band does next will include longtime drummer Phil Rudd).

Rumor has it that AC/DC will announce a new album this spring.