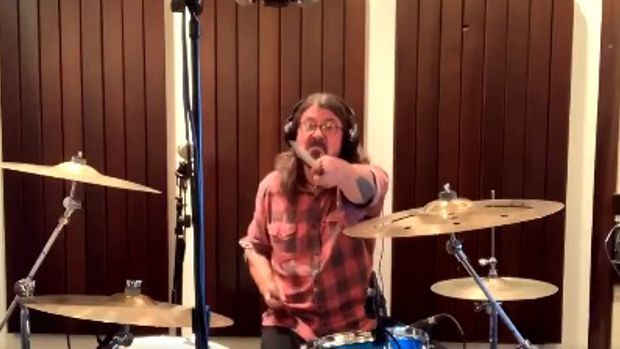 One of the Internet's favorite hard-rocking kids has challenged Foo Fighters frontman and former Nirvana drummer Dave Grohl to a drum-off.

Nandi Bushell has racked up social media followers in recent years with her impressive multi-instrumental covers of famous rock songs.

While Nandi plays multiple instruments, like Grohl, her heart seems to be at the drum kit. Before launching into a recent Foo Fighters drum cover, Nandi twirled her sticks and threw down the gauntlet.

"Dave Grohl, I challenge you to a drum-off," she said. "I hope you enjoy my cover of 'Everlong' by Foo Fighters."

"I haven't played that song since the day I recorded it in 1997," Grohl said in a video, accompanying the Tweet. "Our drummer Taylor Hawkins plays that song, 'Everlong,' for us every night. But Nandi, in the last week, I've gotten at least 100 texts from all over the world, saying, 'This girl is challenging you to a drum-off. What are you going to do?'"

Haven’t played these songs in a loooooong time.....thanks for the inspiration!!!

Your friend in rock,
Dave

(Thanks to my daughter, Harper for letting me borrow her drum set) pic.twitter.com/Ytq47CcZRC

He continued: "I've seen all your videos, I've seen you on TV, you're an incredible drummer. I'm really flattered that you've picked some of my songs to do for your videos, and you've done them all perfectly. Today, I'm going to give you something you may not have heard before.

This is a song called 'Dead-End Friends' from a band called Them Crooked Vultures, which is me playing drums, Josh Homme from Queens of the Stone Age playing guitar and singing and John Paul Jones from Led Zeppelin playing bass. This is my response to your challenge."

From the Foo Fighters' second album, The Colour and the Shape, "Everlong" is one of the band's most enduring hits.

While Foo Fighters' had toured with drummer William Goldsmith in the band prior to the The Colour and the Shape's release, Grohl famously replaced most of Goldsmith's performances on the album with his own drum tracks before the record went to mixing.

Grohl has since ceded drum duties in the Foo Fighters to Hawkins, though he has continued to play drums in many of his side projects, perhaps the most famous of which is Them Crooked Vultures.