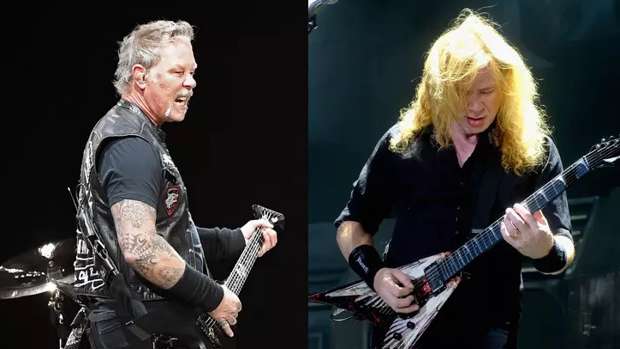 Dave Mustaine will be the first to tell you or anyone that he's had some issues with his former bandmates in Metallica over the years, stemming from his brief stint in the band from 1982 - 1983.

While there remains a rivalry between Metallica and Mustaine's own legendary metal band Megadeth, the bad blood has thinned with time and the feud has been mostly resolved.

As he nears the finish line of his throat cancer treatment, Mustaine said in a recent interview with Rolling Stone that he was blown away by the outpouring of love and support following his cancer announcement this past June.

Mustaine says the well-wishes were "quite a surprise," and many of them came from people he didn't think cared much about his well-being.

"Most notably, I got a text message from my old brother, James Hetfield, and I was so, so happy to hear from him," he recalled. "Contrary to what anybody says and contrary to any of the act that we put on, I love James and I know that James loves me and cares about me. You can see that when the moment of truth is here and I'm telling the world that I've got a life-threatening disease. Who comes to stand next to me? James."

He continued, adding that he also got messages from two more Rock and Roll Hall of Famers who have suffered their own health battles in recent times: Ozzy Osbourne and KISS's Paul Stanley.

"I'm really grateful for everybody," he said. "Even the people who have a hard time with my behavior and my big mouth, I'm just so grateful for them showing care for me. Like they say, at the end of the day, all we've got is each other here in this crazy metal community."

Mustaine credits his Christian faith, his longtime practice of Eastern preventative medicine and his background in martial arts with helping him heal.

He's not officially in remission yet, but he says his doctors are "freaking out" over how quickly he's getting better. He added that he can't wait to get on tour this winter and finish the next Megadeth album.