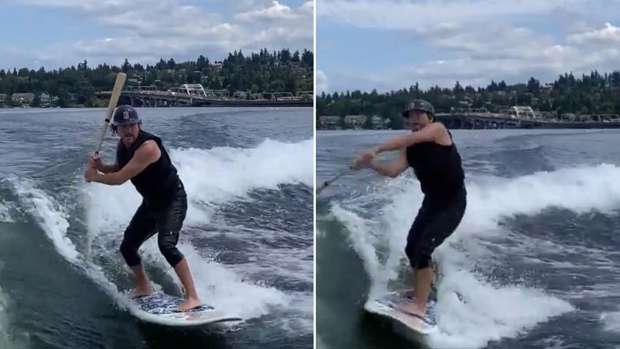 Last week, Eddie Vedder combined three of his favorite things — baseball, aquatic sports, and participating in charitable causes — when he recorded an impressive entry for a new ALS challenge.

The Pearl Jam frontman was nominated by Chicago Cubs President of Baseball Operations Theo Epstein to complete a trick shot as part of the #TrickShot4Snowy challenge, which was started in honor of Calgary Flames Assistant General Manager Chris Snow who is battling the rare disease. Those chosen are asked to complete some sort of athletic trick shot and post the stunt on social media with the #TrickShot4Snowy hashtag to help spread awareness. They're also encouraged to make a donation to support ALS research. At time of writing, nearly $189k has been raised for the cause.

Vedder did not take his nomination lightly. Aside from donating money, he successfully executed a pretty impressive trick shot. Footage shows the singer wakeboarding behind a boat (which is difficult enough as it is) with a baseball bat in his hands. someone on the boat pitches a baseball to him, and he hits it out of sight — all while keeping his balance on the board.

The rockstar nominated Pearl Jam bandmate Jeff Ament and retired NHL star Chris Chelios for the challenge. They've got some big shoes to fill if they want to outdo him!