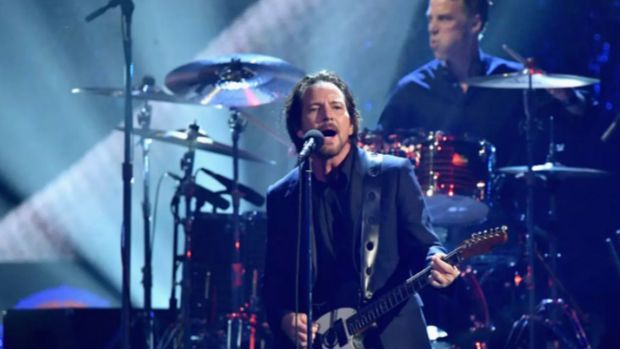 After nine fans were crushed in the audience of their performance at the Danish Roskilde festival in 2000, Pearl Jam briefly considered never playing live again. Following the incident, the band did cease festival performances for the next six years, not taking the stage at festival grounds until they headlined Reading and Leeds in 2006.

In an excerpt obtained by Louder Sound from Eddie Vedder's podcast, I Am Mine, the rocker reflected on that tragedy. "There was at least one person in the band, I remember, that thought maybe we should play again," Vedder said of the incident.

"I kind of disappeared into Europe," he went on. "[I] had my own way of getting through it, which was taking Spanish guitar lessons from people who didn't speak English. That was just a way to focus and be around people that I couldn't understand for the most part. That way I was able to be around people, but since I didn't really know what they were saying, it felt very peaceful and calm."

Ahead of the band's first live performance following the Roskilde tragedy that left nine dead due to crowd crush, Vedder shared that the band was dealing with a lot of anxiety. "We had a brief soundcheck and it felt a little strange, looking out at empty seats... it had a different meaning," he said. "Then it started storming and I'm in this normal room, looking out, and hearing thunder crack, lightning... windows were shaking, hail started coming down – this is in the summer – and then you're gonna play outdoors the next day. It started feeling very tenuous. There was so much emotion going on, I thought, 'I can harness this, I gotta do something.' I had a small tape recorder, and that's when I recorded and figured out the song 'I Am Mine.' It was all about getting ready for that first show, and hoping we'd all be safe for the next night."

Vedder had recorded his comments about the Roskilde tragedy ahead of the events that occurred at Astroworld earlier this month, which had left ten dead due to crowd crush.

An earlier episode of Vedder's I Am Mine podcast heard him remembering Kurt Cobain and the grunge legend's near-fatal overdose a month that occurred a month before his death. Vedder said he remembered thinking upon hearing the news that he "couldn't imagine a planet without" Cobain.