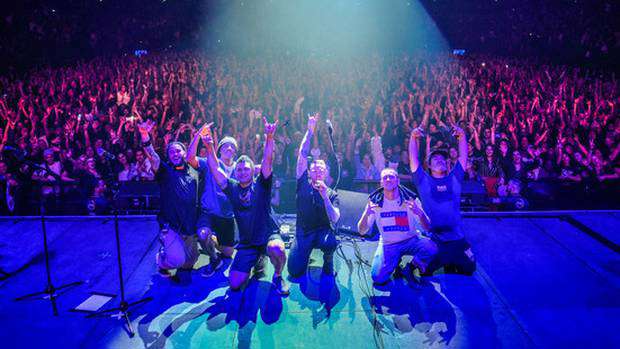 Kiwi band L.A.B's sold-out concert has been a success as fans turned up to New Zealand's first major music gig since the Covid-19 lockdown.

At least 6000 fans turned up to see the Reggae band perform at Spark Arena.

Photos show the massive crowd enjoying the show with their hands up in the air in excitement.

Fans didn't have to worry about social-distancing as the country has not had community transmission of the virus for months — letting New Zealand move to alert level 1.

Mikee Tucker, promoter and director of Loop, which promotes L.A.B, told the Herald it was the first arena music show worldwide for many many weeks.

"In addition to breathing air back into the lungs of the live entertainment industry it was awesome to see 6000 happy, smiling faces," he said.

Tucker said they were expecting a sellout concert as the original gig at Auckland Town Hall sold out within a few hours.

"L.A.B are the hottest act in New Zealand right now ... so moving to Spark made sense," he said.

The success of the big event, along with thousands of rugby fans filling up Eden Park over the past few weeks, means a sense of some type of normalcy is coming back to New Zealand.

The audio/visual company that worked at the event, Warp TV, posted on social media videos of the concert saying it was a "epic night".

"Appreciating how lucky we are in the world to be able get together and enjoy the musical talents of these guys," the page wrote.

Glasgow Live journalist Craig William shared a photo of the concert on social media, saying "there is hope".

Photo from L.A.B.'s gig at the Spark Arena in Auckland NZ last night. There is hope folks. pic.twitter.com/Unync8HpSc

Under alert level 1, the venue didn't have to worry about the number of people that attended or social distancing restrictions.

The venue and promoter were following the NZ Event Sector Voluntary Code, which includes effective contract tracing and ensuring people follow hygiene practices highlighted by the Ministry of Health.