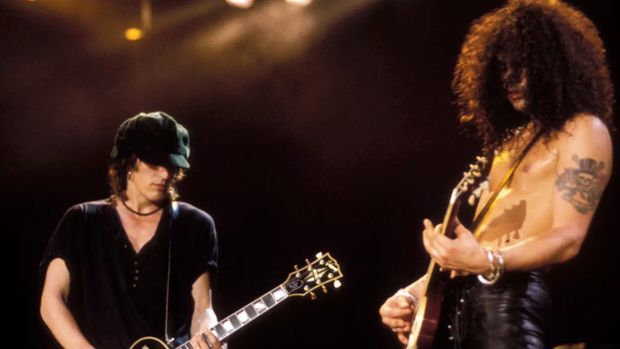 While Guns N' Roses' reunion with Slash and Duff McKagan has been virtually seamless, a persistent refrain at the band's live shows over the last five years is "Where's Izzy?"

Speaking with Classic Rock magazine in a new interview, Slash recalled how close Izzy came to rejoining GNR for the 'Not in This Lifetime' tour in 2016.

“I haven’t really talked to him since then,” Slash said. “There were a lot of different issues that I’m not really going to get into. We wanted it to work out, but we couldn’t seem to meet eye to eye on the whole thing. So it just never happened.”

Izzy, who was a crucial piece of the songwriting unit on GNR's early albums, addressed the reunion question in 2018 in a statement released to the Wall Street Journal.

"The current GnR tour has been a great success for the guys," Izzy said at the time. "My non-participation was simply not being able to reach a happy middle ground through the negotiation process. That's life, sometimes things don't work out."

McKagan has addressed Izzy's flirtation with the reunion as well, recalling that the guitarist was scheduled to rehearse with the band at one point but never showed. The bassist surmised that going on a world tour after so many years off just didn't appeal to Izzy.

Looking back at Izzy's departure from Guns N' Roses in the '90s, Slash noted how the band's drug use factored into Izzy's thinking. After some rough years, Izzy had sobered up, but the rest of the band was years away from getting on the wagon.

"...When he quit, he was looking at us going: 'These guys are gonna f---ing die!'" Slash said. "My whole attitude was like: 'I'll get on with it. Don't f---ing worry. I'll manage.' So there was a certain kind of resentment there – of not really understanding or appreciating where Izzy was coming from. In hindsight, I still sort of feel the same way, I guess, about that. Like, don’t worry about me.”