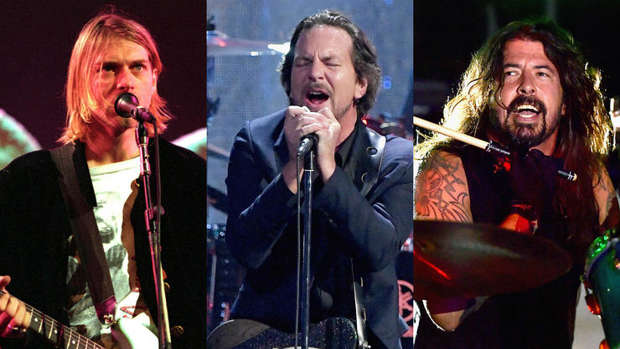 During his life, Nirvana's Kurt Cobain was perceived as a reluctant superstar, a slacker and a junkie. But all of those things can't be true, says Nirvana's former manager Danny Goldberg, especially when you take into account how influential a figure Cobain became.

Goldberg is the author of Serving the Servant: Remembering Kurt Cobain, which is available now. Twenty-five years after Cobain's death, Goldberg says he wanted to give Nirvana fans a more complete picture of the mercurial artist, whose legacy Goldberg believes has been unfortunately overshadowed by his 1994 suicide.

You simply don't become as big a star as Cobain without being an extremely driven person, and Cobain very much wanted to be successful, Goldberg tells Q104.3 New York's Out of the Box With Jonathan Clarke.

One of the most surprising facts of Serving the Servant is Goldberg's revelation at how ambitious Cobain really was. Whether it was Pearl Jam's Eddie Vedder or his own drummer Dave Grohl — whom Cobain famously described as "the best drummer in the world" — Cobain looked at what his contemporaries were capable of and used it as motivation for making his next work even better. But that admiration came with the slightest hint of worry.

Goldberg recalls getting a phone call one day from Cobain while Nirvana was recording Nevermind. Cobain wanted his manager to know that Grohl was singing a lot of vocal harmonies on the new album.

"Well it was interesting," Goldberg says. "Yeah, he was so nice, Kurt. One one hand, he was letting me know because I just knew what a great drummer Dave was; it hadn't occurred to me that he could sing. I didn't pay that much attention to the harmonies. He was letting me know, '[Grohl] is a much better singer than you might realize.'

"Part of it was I think he was just telling me, and part of it was there was a hint of envy, I felt, in his voice too."

Now frontman for the Foo Fighters Grohl cites Cobain as his biggest songwriting influence, explaining that he was in awe of Cobain's creativity for his tenure with Nirvana.

As for Vedder, Cobain kept an eye on the Pearl Jam frontman whose star began to rival his own after Pearl Jam's breakthrough.

"There's no question, [Vedder] was somebody that he personally did like, but he felt competitive with Pearl Jam, and he wanted Nirvana to be number one — no question about it," Goldberg added.

There was a time when Pearl Jam was bigger than Nirvana, the manager points out. Pearl Jam's Vs. album, which arrived a month after Nirvana's In Utero, set a record for first-week album sales.

"It was a bigger record, and it was Pearl Jam's moment," Goldberg says. "Kurt was not crazy about that. He called me once and said, 'Geez, I've seen three Pearl Jam videos on MTV and our video only once. Is someone mad at us there? Is there something we should do?' I said, 'Kurt, these things go in cycles. It's fine. They like you at MTV.'"

"He was competitive. I don't think you can achieve what he achieved without being ambitious and competitive. But part of his ambition was to do it all completely on his own terms. He never did a show he didn't want to do. He didn't change anything about his art for anybody. He didn't care what the label or management or the media said. He was inter-directed as an artist. He was committed to a set of cultural beliefs that were counterculture. But he liked winning, and he liked having hits."

You can watch the full Out of the Box interview with Goldberg below.