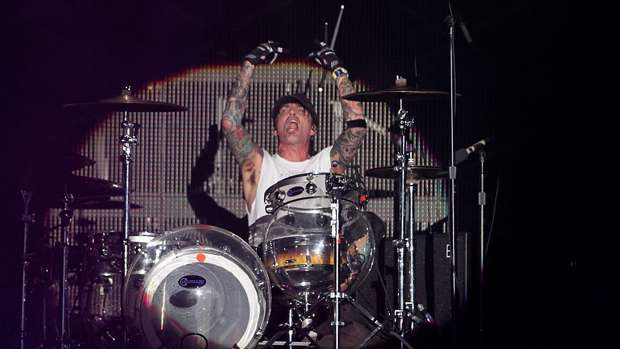 With Mötley Crüe's highly-anticipated reunion tour eight months away, drummer Tommy Lee isn't sure yet what his new stunt will be.

Lee's death-defying drum solos have long been a highlight of Mötley Crüe's live spectacle. During the band's farewell tour in 2015, Lee performed his solo from a roller coaster-like contraption. But with a new, bigger-than-ever tour coming up, the drummer admitted it's difficult to devise an even crazier moment.

During a press conference Wednesday in which members of Crüe, Def Leppard, Poison and Joan Jett & the Blackhearts, confirmed 'The Stadium Tour' next summer, Lee was asked whether he had yet worked out what his new solo is going to entail.

The drummer joked that the obligation to top himself on the new tour could get dangerous.

"I'm going to shoot myself out of a f---ing cannon at this point," he said. "I don't know what's left to do. We started designing the production a couple of days ago. We've always put everything we have into the design and the production, always try to do a show where people walk out going, 'That was f---ing insane.'"

He added he's looking forward to exploring some of the technology that's been developed in the five years since Mötley Crüe's last tour.

"We're starting to put together something incredible," he said. "And [the shows are] in a stadium, so everything's going to be four times as big."