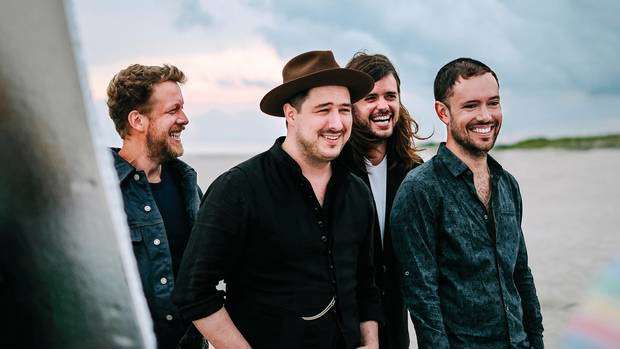 Marcus Mumford is in limbo. Delta, the new album from his band Mumford & Sons is still a couple of weeks from release when we talk, and the band's world tour that brings them to Western Springs in January is not kicking off any time soon. He's at a loose end.

"It's a bit like pacing the hallway while you're waiting to have a baby," he laughs. "We're so close to having it out. It's a funny time. Like being in a vacuum. We're proud of it and we just want people to hear it."

A lot of people also want to hear it. It's been three years between drinks, so to speak, for the band. Their last record, Wilder Mind, came out back in 2015 and rolled right into the number four spot on our charts. Emotionally charged and universally accessible, the group's folk-pop orientated Americana saw it hang around in the charts for 29 weeks.

Sonically, Delta is bigger, as the band reintroduce the acoustic elements they ditched last time round. The songs themselves paint in stadium colours while Mumford's lyrics display astute stadium accessibility - indeed the soaring, phones in the air, stadium swayer If I Say fades out by triumphantly repeating its universally relatable, yet slightly bland, refrain of "If I say I love you, then I love you".

This led to much discussion between the band on how to release their new music. A series of EPs was mooted. Releasing a new single each month was considered.

"But it just didn't feel like us, man," he says. "We're an album band. The most important thing for us was making an album we could stand behind. With an album you make different creative choices to the ones you'd make if you were just doing singles."

The album format is important to them. Because they're not just releasing albums to conquer charts. Their ambition is higher. Big picture. They approach making an album with one eye firmly on their legacy and the eventual discography they'll leave behind.

"We always intended to be able to be in this band for as long as we could stand it. We set things up early. We wanted to back ourselves. We were optimistic at the very beginning of the life of the band that we could try and do this for a long time."

They were singular about this. At the very start the band looked for a deal that would allow them to keep control over their recordings. It's unusual but they own all their music and only license it out to their record company.

"It wasn't the best way to make a quick buck," he admits, "But we felt having control over our music in the long run was going to be better for our career as a band. We want to have plenty of material to play live, material that we're proud to stand behind. It's why we're really meticulous on lyrics. And the songs in general. Nothing feels throwaway."

You could consider Delta crunch time for the band. It's usually the second album that's credited as the "difficult" one for a band. But Mumford has a different take.

"I don't think you're a grown-up band until you've made five records. I still feel like an adolescent band," he says. "Honestly, I think the second album thing is a bit of a myth. Every album is hard because you're constantly trying to redefine yourself and show people why you're not the band that they originally thought you were. At the start all they've got to go on is the singles and some photos or the band name. None of which is ever going to help define the totality of the band. We're looking forward to telling more of the story."

In terms of becoming the band they want to be, Mumford reckons they're "not there yet", but they're not stressing it.

"With Delta we took some pressure off because we know this is not gonna be our last record," he says. "We've already written a lot of the next one and in February we'll be working on it. So, we feel we can make more adventurous choices with our music because it's not the be all and end all. Even though we threw everything at it and worked harder than we've ever worked, but we know there's going to be another one and then another one after that. We're just gonna keep going and writing our own narrative."

In practice, he says, this meant, "no restrictions". Having built their name off the acoustic indie folk on their debut, Sign No More, and its uber successful follow-up, Babel, the band had their own Judas moment by going electric on Wilder Mind.

Delta incorporates both aspects of the band but adds a newfound desire for sonic experimentation.

"Delta's a fusion of modern music-making techniques and more classical ones," he enthuses after describing some of the wilder aspects of Delta's creation; getting a beats tutorial from Skrillex in a hotel room in Buenos Aires, twisting drum sounds out of a Moog synthesiser, or sampling odd sounds captured on mic during their own recording sessions, chopping them up in software and repurposing them into their tracks.

"We felt more trust in each other. In the past we felt more competitive about ideas, like, 'You've got this idea and I've got one and I think mine is better.' Now it doesn't feel like that. We trust each other. If someone has an idea, it's like, 'Go for it, man.' We've been in a band together for 10 years, we've known each other 25, let's just follow your idea. I'm sure it'll be great. And the other thing with Delta was we didn't over think it. We didn't want to ruin it by being too calculated. Most of the instrumental takes you hear are first takes. And that's not how we recorded before."

And now they're on their way here to play it.

"I can't f***ing wait mate," he says. "I'm not joking. New Zealand is my favourite country to tour in, in the world. I don't know why. We've been a couple of times and we always spend a couple of days extra there. It's such a beautiful place with such wonderful people and you go such a f***ing long way to get there you might as well make the most of it when you are there. We've had some of the most amazing times we've had on tour there and the New Zealand audiences are always very gracious to us. I can't wait. And Auckland's gonna be wicked 'cause the line-up is killer."

This is not the usual rock star blag. The band curated the line-up of Michael Kiwanuka, Leon Bridges, Angie McMahon and Sam Fender for their Western Springs gig themselves, with the intention of having a festival-type atmosphere. Mumford tells me it's going to be a completely unique stop on their tour.

"Auckland will be different, the idea is for it to be more immersive. But you'll have to wait and see."