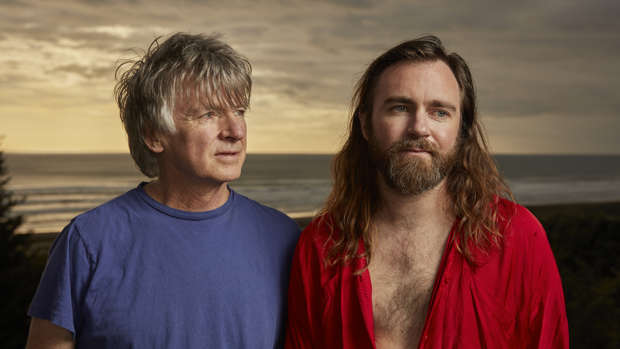 Neil Finn and Liam Finn have today announced their first album together, 'Lightsleeper', is set for release on August 24. The news arrives alongside lead single "Back To Life", where powerful melodies join vulnerable lyrics, evoking the magic that happens when people gather to sing and remember absent friends - love's triumphant ability to transcend our physical world.

Listen to "Back To Life" below.

'Lightsleeper' is available to pre-order here

As it's a family affair, it's entirely fitting that the story of Lightsleeper begins at a wedding and here the album opens with a gift from father to son on his wedding day, "Together, Together", the chorus of "Island of Peace"  begins.

Recorded mainly in Neil's Auckland studio, Lightsleeper bursts with melody and the trademark, euphoric flips that the Finn family are known for. When Liam's lo-fi atmospherics meet Neil's iconic pop sensibility, it's met with a feeling of intimacy and awe that makes it easy to wonder why the dynamic father and son duo haven't written together, earlier.

The simple Finn family ethos of making music with friends and family continues right through to the personnel recruited for the album; the touring band, Sharon Finn - Neil's wife, and Liam's mother - plays bass on two of the songs, Elroy Finn - Liam's brother - drums on seven; and good friend Connan Mockasin returns for four. Greek friends Elias Dendias and Spiros Anemogianis bring plaintive bouzouki and accordian to "Back To Life", and legendary Mick Fleetwood turns up to play on "Anger Plays A Part", "Any Other Way" and "We Know What It Means".

The unmistakeable spirit  -  of musicians at their peak, bound together by a still-hot desire to make music that isn't simply that year's work, but something brewed up with bones, love, quiet revelation and the perfectly-evoked euphoria of being alive - is what makes 'Lightsleeper' such a gorgeous progression in the Finn family musical history.