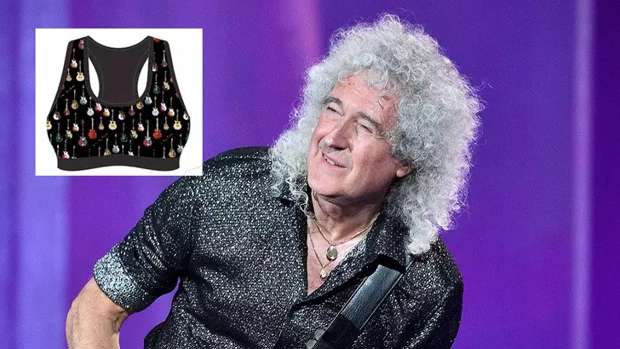 Among an array of accessories and gaudy t-shirts, Queen guitarist Brian May is now also selling sports bras for around $40.

The bras and coordinating "Fat Bottomed Girl" leggings (now sold out!) are decorated with May's famous "Red Special" guitar (in a variety of colors).

A product description of the bras on May's website says "this active wear salutes the entire range of Brian May Guitars with a bright, bold design prominently featuring the united colours of BMG — because it doesn't have to be red to be special!"

When some female fans began Tweeting about the new offerings, Brian May Guitars' official Twitter account wryly urged fans to "Get 'em while they're hot."

Sources told Page Six that May has previously drummed up business for the company by modeling some of the new apparel himself, such as the "Hold Everything" waistcoat.

"Needless to say, he won't be doing that here."

The source also explained that the women's active wear has been popular so far "so the gamble's seemingly paid off."

Brian May Guitars is primarily a musical instrument business, selling electric and acoustic guitars, basses and ukuleles in the style of May's iconic axe, as well as a variety of guitar-related gear, including strings, effects and software plug-ins.