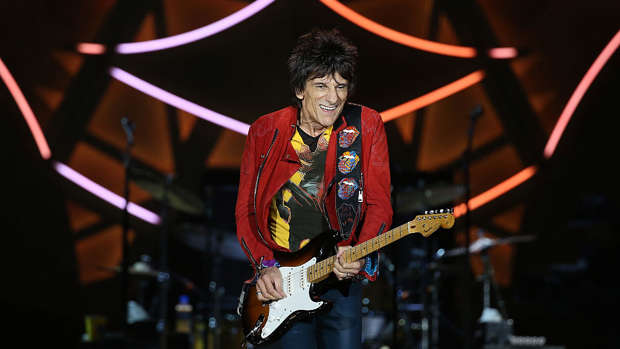 The 72-year-old rocker premiered his new documentary ‘Somebody Up There Likes Me’ during London’s Film Festival on Saturday (12.10.19), and has said the biggest twist in the movie is likely the fact that he’s still alive to make it, after surviving years of cocaine and alcohol addiction.

Speaking to Metro.co.uk before the premiere, he said: “There’s a lot of revelations, in that I’m still here today! Fans will be like, ‘Wow! How’d he get through that one?’
“The great thing [in the documentary] is the essence of survival. And like I said, the support was reflected throughout the cuts that I’ve seen of the movie the short clips I’ve seen. To see it all together … Well, it’s going to be a buzz.”

‘Somebody Up There Likes Me’ sees the Rolling Stones star detail the depths of his addiction, which at one point saw him smoke cocaine using a Bunsen burner to light the drug in a glass pipe in a technique known as freebasing.

In the documentary, Ronnie says: “I felt that with the base, the ­freebase, it was controlling me. I had no control over it. It took me about three years to get off it.

“It’s incredibly powerful, it ruled ­everything, getting high with that pipe was frightening. [You] do anything for it and I can understand why people went out and killed for it.
“I enjoyed the s**t out if it. Took it with me wherever I went. I thought it was the best thing going.

“I would take it to parties and go, ‘Everybody try this’, get [a] great big Bunsen burner out, the pipes, the works, freebase and ­everything. And people would be going, ‘You’re f***ing crazy’ but I would love it.”
But living such a destructive lifestyle has its downsides, as the ‘Angie’ hitmaker says he witnessed many of his friends die as a result of their addictions.
He added: “I have seen enough people go over the top.

“Some of them didn’t make it. It was a really horrible thing and you would learn a lesson from that.”

Ronnie is sober now, but doesn’t regret his past as he had “some really good spiritual awakenings” whilst high.

He said: “I had some really good spiritual awakenings during my using years and although I wouldn’t ­recommend it as lot of it was the ritual associated with the ­presentation of the different drugs, the rolling of the joint, the filling of the pipe or the ­chopping of the coke.