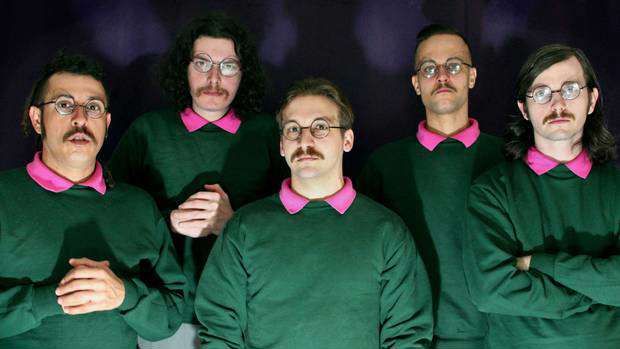 "Howdilly doodilly," he chirps cheerily down the line from his home in Phoenix, Arizona. "This is Head Ned."

As his name implies, Head Ned is the frontman for the Ned Flanders-inspired heavy metal band Okilly Dokilly. Taking inspiration and influence from Homer Simpson's relentlessly cheery, super religious neighbour and pairing it with crunchy heavy riffs is the sort of bizarre mash-up you never knew you wanted.

And if it sounds a bit like a joke, that's because it was.

"Our original drummer and I were room-mates and we had a running joke where we were trying to think of the worst Death Metal band name ever," he explains. "Like a band walks out on stage and there are pyrotechnics and gory stuff everywhere and they go 'Hi! We're the Comfy Comforters.'

"One of the names we thought up was Okilly Dokilly and from there we thought, 'Hey, what if the lead singer was Ned Flanders,' and then we thought, 'What if everybody was Ned Flanders and all the lyrics were Flanders' quotes,'" he laughs. "When we realised we could call the genre 'Nedal' and could spell okily-dokily with 'kill' in it twice we knew there were too many good puns not to do anything with."

The contradiction at the heart of the gag was just too great to ignore.

"When you think about stuff that's typically associated with metal, Ned embodies everything that's the opposite of that. He's overly friendly, he's generous, he's very religious, where metal's often associated with anger and anti-religion and all those things. So to have a metal band themed around Ned Flanders seemed like it would create something entertaining."

They decided to go all-in on the gag. Expanding to a five-piece, the band all grew Flanders' moustaches, got matching pink polos, green sweaters and grey slacks and set about writing some tunes. The plan was to play a show or two but the odd crossover they'd jokingly stumbled upon immediately resonated, pulling in fans of both The Simpsons and metal. Even the extremely serious Time magazine was won over saying, "You need to hear [them] right now."

They play Auckland and Wellington next week and say "Bonus Neds" are encouraged at their shows. A London gig on Halloween last year holds the record with an estimated 30 per cent of the crowd also dressed as the band's animated muse.

That sounds like a challenge, I say. "Yeah, absolutely," he laughs, although he's quick to say all Simpson's characters are welcomed.

"We've had people come as Homer, Sideshow Bob and all that," he says. "It's great because it's like a tiny Simpsons convention at every show. We stay and chat with fans after."

While their concept may be a joke, the music's nothing to laugh at. Okilly Dokilly's sound is heavy and murky, full of brutal riffing and augmented by Head Ned's deep metal growls.

"Going into it none of us had been in metal bands before," Head Ned admits, saying his previous bands were often compared to the likes of Weezer. "So we were trying to figure out how to sound as metal as we could with the gear we had. We were cranking distortion pedals and pushing amplifiers that weren't built for metal as hard as they could go to try and get those metal tones."

"Even though it's got this goofiness to it, that's definitely for the shows. We'll spend hours on one drum part, I'll do hundreds of vocal takes. We dedicate ourselves to get the music sounding where we want it to be. The Ned antics are for the live shows," he says. "At lots of live shows, I get bored so we try to be something that's heavy and interesting live. I ended up with a very short attention span growing up with TV. "

That includes plenty of The Simpsons. His dad was a massive fan and they'd watch it together. What they couldn't have predicted was that one day he'd be on the show.

"They put our White Wine Spritzer music video behind the credits of an episode last year," he grins. "It was unreal. Everybody was blown away. It's really cool and something far beyond what we ever thought we would achieve with the band."

And to think it all started with a joke.

"Yeah," he laughs. "From just thinking of a goofy name for a metal band to end up being on The Simpsons and getting to tour around the world... It all starts with an idea and a sense of humour I guess."