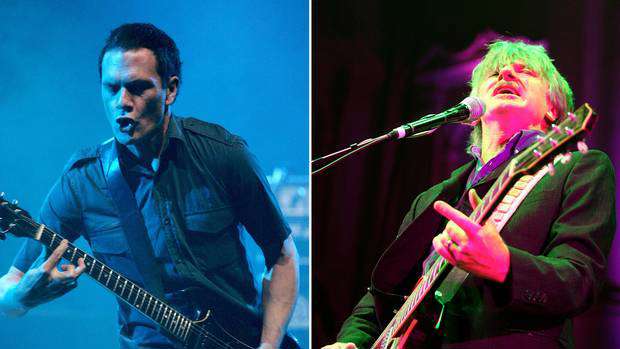 Kiwi musician Shayne Carter has opened up on his booze-fuelled rock and roll antics - including run-ins with other chart-topping Kiwi musos such as Neil Finn.

Carter – who has enjoyed chart success with Straitjacket Fits, Dimmer and The Adults – has lifted the lid on his previous excesses in his tell-all new book 'Dead People I Have Known'.

In a section titled Burn It Up, Carter revealed his longstanding issues with Crowed House's Finn started when he attended a gig by the Party Boys – which featured Finn, Dave Dobbyn, Mike Chunn and Peter 'Rooda' Warren – who were "on a summer tour, making lots of money playing old party hits in front of a Rheineck beer banner".

"This offended every part of me. I got drunker and more belligerent as their set wore on," Carter wrote.

"I was blacked out when we went backstage, even though I was still walking. That's the worst part of being an alcoholic: when you're mindless but still going around.

"Of course, I challenged every one of the musicians to a fight. I wanted to punish them all, which was ridiculous, because at that point I wouldn't have been able to fight my way out of a soggy Rheineck cartoon."

Carter was ejected from the backstage area.

"My run-in with Neil Finn was the beginning of a small grudge match that has simmered, quietly, for years," he wrote, adding: "Neil was always magnanimous and never confrontational".

Carter reveals in the early 2000s his spat with Finn extended to include his son, former Betchadupa frontman Liam Finn.

At a party at Liam's house he said he was "up to my usual nonsense" and was later refused a beer by Liam.

Several weeks later the pair met at another party where Carter "pointed a few things out".

He can't remember specifics but believed it was comparing Liam's music to that of his father and uncle, Tim Finn, which "offended" the young musician.

"'Get back to me when you've written a tune, Shorty', I should have replied, but didn't," Carter wrote.

Carter and Neil Finn's relationship was tested again when the pair were included in Bic Runga's backing band for a New Zealand tour.

That included Finn becoming angry after Carter had played a Dimmer demo at "obnoxious volume" in his hotel room in Nelson.

He also revealed a fellow band member "performed an act of self-expression" in the shower of Neil Finn's house, "hoping to clog his drains".

Neil Finn told the 'Herald on Sunday' he remembered the incident during the Party Boys, tour saying Carter was "very drunk backstage and wanting to fight me but then he was slumped up against the wall and fell over".

He had no memory of the incident in Nelson but said it "sounds pretty wild, like a Flight Of the Conchords road story".

When asked about the shower incident, Finn responded: "His bandmate was just another in a long line of w****** who wanted to block my drains."

In his book, Carter described himself as previously greeting touring bands as "a one-man alcoholic welcoming committee, then pass judgment on them, to them, after a gig".

"I was a junior Johnny Rotten calling out the fakes."

In 'Dead People I Have Known' he also recounts urinating in the bath "or maybe it was the closet" at Jordan Luck's house.

Flight of the Conchords member and Academy Award-winner Bret McKenzie has also felt the ire of Carter's tongue, with the muso saying he told the ex-Black Seeds member he "couldn't stand white men pretending to be black".

• Dead People I Have Known, Victoria University Press, is available from May 9 and has a RRP of $40