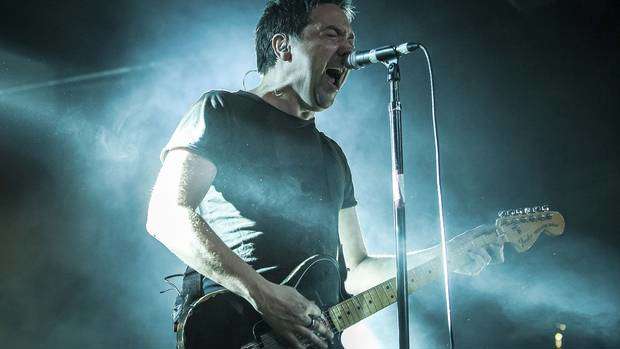 When you've seen Shihad perform a few times, you've probably learnt a couple of things. Like, don't get stuck at the bar, or worse, in the toilet, when they come on stage.

Jon Toogood and co are known for their fiery starts, often delivering the best moments of the show first up. It's something you don't want to miss.

So, at the Town Hall on Friday night, it was a surprise to see Shihad launch into Think You're So Free and FVEY - two of the most visceral songs from their last album - like they were lumbering along in second gear.

Perhaps it had something to do with the night's strange format: a 30th anniversary flick through the history books that went something like this: at least two songs from every Shihad album, from FVEY to Churn, played in reverse.

It may also have had something to do with the crowd, who were supposed to be warmed up by Kora, but were instead treated to something that felt a little more like a Stan Walker show than the raggedy reggae-metal fusion the band used to deliver.

The crowd was also forced to wait in lengthy Town Hall bar queues for a beer. To make matters worse, the bars were shut just halfway through Shihad's set.

Thankfully, Shihad soon found top gear and began rocking like the elder statesmen they are. Surprisingly, it happened during songs from their controversial Pacifier album, or what Toogood later called their "confusing period".

Perhaps, almost 18 years afterwards, those songs are now allowed to exist as just songs, without being impaced by the context around them.

So, Comfort Me became a pummelling onslaught that had some punters playing air guitar and air drums like they were up on stage. Run, meanwhile, morphed into something that resembled the song's music video, a wall of noise that had fists punching the air the entire time.

It just got better from there: the punky sprawl of La La Land, a crowd-pleasing five-song run from The General Electric, anthems like You Again and Home delivered exactly as they should be, and the restrained grind of Deb's Night Out becoming the night's standout moment, a moody hum you didn't want to end.

Pleasingly, things that always happen at Shihad shows still happen at 30: Phil Knight still plays all those riffs like he's melting his own face off, Karl Kippenberger manages to smile separately at every single crowd member, and Tom Larkin remains a powerhouse drum presence.

Then there's Toogood. No longer the whippet thin livewire of old, he's still a polished, professional front man, one who knows exactly how to pace a show. He also knows how to pace himself, perhaps explaining that sluggish start.

But, at 47, he's not afraid to crowdsurf in the moshpit or jump up on speakerstacks, and he still delivers one of the best "f***s" in Kiwi rock. Just see All the Young Fascists for proof.

In the past, he's done all this without wearing a shirt. This time, Toogood's shirt stayed on until their last song, the industrialised pummelling of Factory.

Wear and tear? Shihad might be showing their age, but they don't need to call in the mechanics just yet.