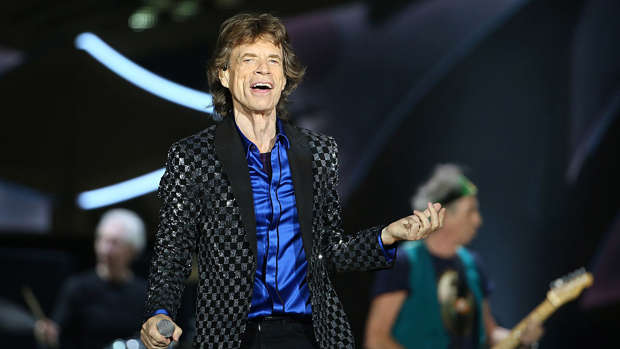 The Rolling Stones frontman had a heart valve replaced earlier this month but his 71-year-old bandmate has revealed the 75-year-old rocker is "doing well" in his recovery.

Ronnie and his wife Sally recently enjoyed a vacation with fellow Stones musician Keith Richards and his spouse Patti Hansen, and the group decided to try and cheer Mick up with some funny videos.

Ronnie added: "Sally and I went on a break to the Caribbean with Keith and Patti and sent him videos of us playing and singing get-well songs on the guitar.

"That cracked him up. We're all so pleased he's doing well. Mick is certainly confident when he struts and so he should be."

As well as being a world-renowned guitarist, Ronnie's second love is painting, and the 'Satisfaction' hitmaker admitted that his bandmates Mick and Keith, are "used" to being drawn by him.

He added: "As a band we're so passionate about our music. The boys are very used to me drawing them. They enjoy seeing themselves in a new light with a new lease of life."

Ronnie - who has Jesse, 42, with first wife Krissy Findlay, Jamie, 44 Leah, 40, Tyrone, 35,  with former spouse Jo Wood, and two-year-old daughters Gracie and Alice with Sally - thinks his twin girls may have already inherited his talents.

He continued: "Yesterday I was playing the guitar and Alice was bashing notes out on the piano and Gracie was dancing. They like painting, too."