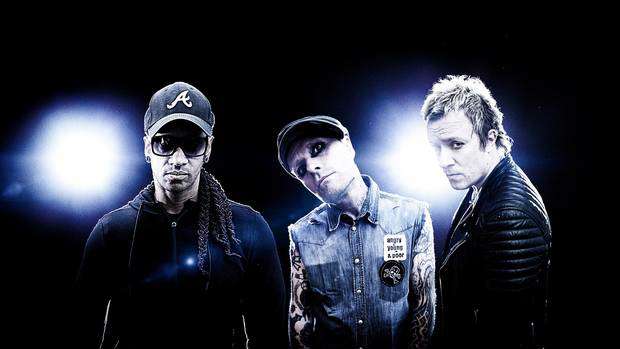 The Prodigy's music makes you want to jump up out of your chair and break stuff. Blow it all up. Burn it all down.

So it's no coincidence that the very first thing you hear on No Tourists, their explosive new album, is the sound of glass smashing - a car window, an empty bottle, a Molotov cocktail? All of the above? Perhaps.

Anyway, it's music that amps you up is what I'm saying and that's as true for those listening as it is for The Prodigy's main man, Liam Howlett.

The facts back him up. He only finished a gig in Liverpool about an hour ago, it's pushing 1.30am where he is and he sounds ready to hit the town rather than the hay.

"If you're in a band and you're not ready to go, or not up for it and not hungry for it, then just give up. Let someone else have a go. You know what I mean?" he says. "We're still really excited about doing this, playing live and writing tunes. There's no time to chill. There's too much to do."

His "To Do" list would make for interesting, exhausting, reading. The band just kicked off a world tour in support of No Tourists, including a date at the Trusts Arena, but Howlett says The Prodigy are always on the road.

"We don't write and then suddenly go on tour," he says. "We're always doing gigs."

This obviously informs the music Howlett writes for the band. New tracks need to match or better the energy, tension and vibes required to shake an arena full of people. More difficult, they need to stand up to Prodigy classics like Breathe, Out of Space, Poison and, of course, Firestarter.

"But we know what we're doing with this stuff," he says. "We live and breathe it. We know when something's 'stage ready'."

This, he reckons, is what gives The Prodigy their edge. Their constant tour schedule ensures the music they make in the studio will be aired live.

"I take it for granted sometimes," he says. "But it's the one thing we know we can do. We can't guarantee that our tracks are on the radio or go anywhere, but we know that we're gonna play them live. It's the one thing we can count on. With this album, all the tracks were written with that in mind."

He's not all talk. Half of the tracks from No Tourists are in the current setlist. But that doesn't mean you're going to miss out on the classics.

"We always say, 'if you're putting a new one in, you've gotta put an old one in'. As a band, we want to have the new and the old. It's important for people – and for us. We always play our old tracks because that's where we're from," he says. "I don't like it when you go see a band and you just hear all new music. It's like, 'where are the tracks that built you?'. We know it's important to hear The Prodigy classic tunes."

Then he laughs as he admits, "but I do remix them to make it exciting for us still. You imagine playing Firestarter for the thousandth time… We love playing it but it's good to mix it up and flip it on its head."

Where they're from is very much at the forefront of No Tourists. The Prodigy remain the best example of that fruitful collision of punk anarchy and electronic mayhem. They remain as forward-sounding and fist-pumping as ever, but there's many sonic references to their rave roots (We Live Forever, Timebomb Zone), the acid rave takeover (Give me a Signal) and their winking aggression (Champions of London, Boom Boom Tap) slathered all over the record.

Despite that Howlett insists he's not currently in a nostalgic state of mind.

"I don't like nostalgia," he says. "I don't like retro either." Then he laughs and says, "retro's got no future".

"We're not a nostalgic band. We created that sound. We're from the rave scene. We're not imitators or trying to recreate something from the past. We created it ourselves. We were there when it started so we own that sound. It's for us utilising what we started, but making sure it sounds fresh," he explains.

"When we're in the studio it's fine tapping into the old stuff but does it feel fresh to our ears? Obviously, it did and that's why we're able to push it forward. A track like Timebombdefinitely feels old-school but it also sounds like The Prodigy of this year. It's a tough tune but it's got that old-school Prodigy sound about it.

"I said to people I was going back to the beats on this record and that's what I've done. The last album was pretty violent and heavy. We couldn't carry that on, you don't want to repeat yourself. It was time to attack it from a different angle. It's equally as aggressive but it does it in a different way."

The sound he was going for on No Tourists was "a punch in the face as well as a wink, kind of cheeky but nasty as well". Which is as good a summation of The Prodigy as you'll find anywhere. "They're the type of tracks I'd play in my car," he says. "Loud."

"But we know the score. We had to have fire to record No Tourists and we've got to have fire to perform this record. People will be the judge of that when they see us live. They'll either dig it or not dig it."

And then, with all the confidence of a man who a mere hour ago sonically destroyed a crowded arena Liam Howlett smirks and says, "But they will dig it. Trust me."