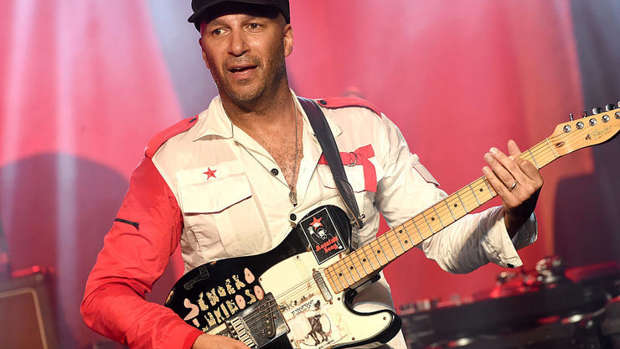 Tom Morello recently played a show in Seattle, so it was only fitting he'd pay tribute to his late bandmate Chris Cornell in his hometown. During the concert, he played a medley of Audioslave songs, including "Cochise" and "Like a Stone," and taped the message "Cornell Forever" on the back of his guitar.

During his encore, the guitarist surprised fans with a cover of his recently reunited band Rage Against The Machine's 1991 hit "Killing In The Name Of."

Morello's currently on tour to support his latest solo effort The Atlas Underground. He posted some photos from the night on Instagram, which also included an appearance by Guns N' Roses' Duff McKagan. Check out the post below.

Kick ass sold out show in Seattle! Good to see my buddy @officialduffmckagan. Great, great crowd tonight. #CornellForever . Mass incarceration hurts everyone. Caging people, taking away their ability to vote and locking them up for decades separates families, harms communities, and costs millions of dollars. There is a better way. And by the way, it’s not a war on drugs. It’s a war on people. People with dealing with substance use disorder don’t need jail, they need treatment and support. The ACLU is leading the revolution for freedom and fighting for those that our broken systems are trying to throw away. Join the movement at aclu-wa.org