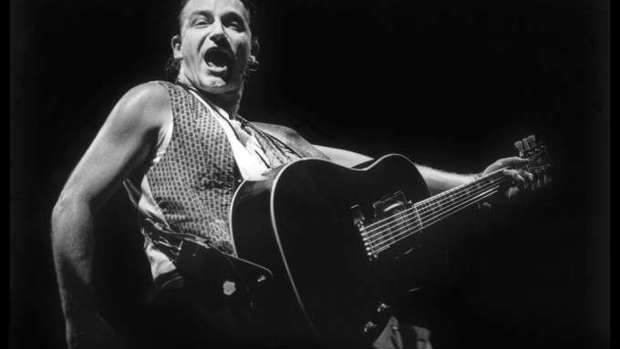 When Irish super group U2 released The Joshua Tree in 1987, the world was a very different place. Most of eastern Europe was firmly under the control of the now-defunct Soviet Union; there was still a wall dividing Berlin; mobile phones were the size of a small suitcase; there was no internet; and Ronald Reagan, an ex Hollywood entertainer, was US President (ok, not everything was different).

Here in New Zealand there were only two TV channels and they were both state-owned; CDs cost $20-$30; the Rogernomics reforms of the fourth Labour Government were in full swing; Kiwis up and down the country were forming or joining share clubs and investing in Kiwi-listed companies such as Judgecorp, Equiticorp, Ariadne and Goldcorp; and the "long business lunch" was underwriting the thriving trade in Auckland restaurants and bars. Money was everywhere and it seemed as if half of Auckland's wealthy set owned a BMW.

It was also the era of "Queen Street farmers", so named because they either worked in the city but owned a farm for tax purposes or they lived in a rural location and drove a vehicle more suited to a rural environment.

In every sense, the era was one of excess.

It was also a very different time for the property market. Inflation was running at 18.9 percent (an all-time New Zealand record which still stands), the median wage was $26,700, the median house price was $88,900 (almost 3000 times the cost of a copy of the Joshua Tree), and mortgage interest rates were running at around 21 percent - yes, you read that right.

This means that the monthly mortgage payment on an average home would have been around $1,566 a month, or almost $19,000 a year - more than 70 percent of the median wage at the time. But despite this, people were still buying property, which, given what happened towards the end of 1987, was probably a good thing.

On Monday October 19, 1987, (which was actually Tuesday October 20 in New Zealand) the US Stock Market crashed, plunging the rest of the western world into economic chaos and tanking the world economy. By the time the dust had settled the New Zealand stock market had dropped by over 60 percent, not only wiping huge value off shares but also causing the collapse of several high-flying public companies. Many Kiwis lost everything they had, and even those who had only dabbled in the sharemarket were so burnt by the experience that they have avoided investing in stocks to this day.

But what happened to the members of the Joshua Tree generation who invested in property? You can probably guess. Depending on where they were in New Zealand, that "average" $88,900 home has increased in value by around 92 percent in each of the next three decades - and is now worth around $560,000 (more than 30,000 times more than what it costs to download the Joshua Tree now).

Small wonder that the decade is the one in which many Kiwis got the bug for property investment. Not only did the Stock Market crash convince many of them that property was a relatively safer investment, but in the decades since, their faith in the property market has been well rewarded by successive property cycles.

Incidentally, it’s worth comparing the lot of someone buying property in 1987 to the circumstances facing someone buying property today – the numbers might surprise you. Today, inflation is running at just 1.7 percent, the average wage is around $52,000 a year, mortgage interest rates are down to record lows at around 3.7 percent and, as I’ve already noted - the median house price is around $560,000.

This means that the monthly mortgage payment on an ‘average’ home, today, would be around $2937 - or a bit over $35,000 a year – which (surprise surprise) is around 67 percent of the median wage. In other words, despite the massive differences between then and now, the relative position of a home buyer is more or less the same, today, as it was for a member of the Joshua Tree generation in 1987.

This article was first published on oneroof.co.nz and is republished here with permission