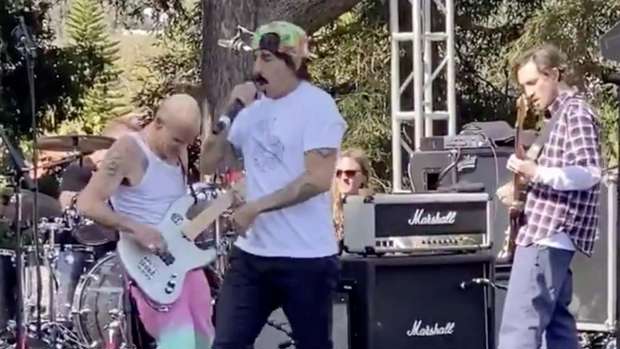 In December, Red Hot Chili Peppers announced the return of guitarist John Frusciante after parting ways with guitarist Josh Klinghoffer, who had played with the band for a decade.

On Saturday (February 8), Frusciante played with the band for the first time since 2007 when he joined Anthony Kiedis and Flea for a short set at a memorial concert for producer Andrew Burkle put on by the Tony Hawk Foundation.

Drummer Chad Smith was sadly absent from the performance so it wasn't a full band reunion but Jane’s Addiction drummer Stephen Perkins stepped in for Smith. Red Hot Chili Peppers performed three songs for the memorial concert —“Give It Away,” Iggy Pop’s “I Wanna Be Your Dog” and Gang of Four’s “Not Great Men.”

Thank you to the Burkle family for including us in your celebration of Andrew. His passion for life was contagious & his spirit lives on through our work at @THF.
A good example of Andrew’s magnetism was on display when this all-star lineup came together to play Iggy Pop #acbrox pic.twitter.com/8F3WjGT8K7

Klinghoffer recently spoke about his departure from Red Hot Chili Peppers stating he let his guard down while in the band. “I didn’t think this would happen because we had written a whole album pretty much and we already had a pile that we had ready for two albums and we still wanted to write a little more,” he explained. “I didn’t think they’d want to halt that process and write anew, but it didn’t surprise me.”

For those who can't wait to see Frusciante reunite with RHCP live, the band will be playing a handful of festivals this summer including Hangout Music Festival, Bottlerock, and Boston Calling in May, as well as some international festivals in June. Hopefully the band is leaving its schedule wide open to announce a headlining tour.

The band is also currently writing new music with Frusciante but have not announced an album yet.