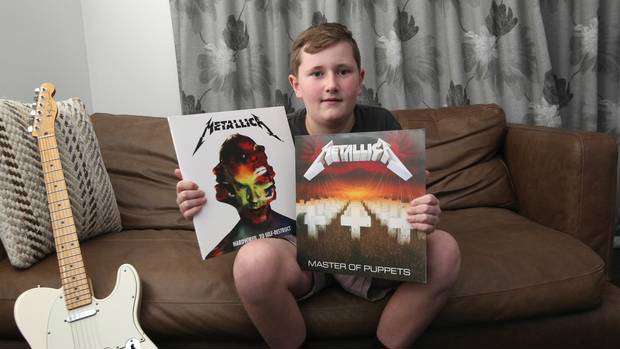 William Bush is only 12 but he has the music tastes of a 50-year-old.

His 100 plus vinyl record collection includes the likes of musical greats; the Beatles, Led Zeppelin, AC/DC, KISS, Pink Floyd and Dire Straits but his love of Metallica overrides them all.

He has five records including their fifth and self-titled album also known as the 'Black Album', as well as 'Master of Puppets', 'Ride the Lightning', 'Death Magnetic', and their most recent 2016, 'Hardwired ... to Self-Destruct'.

When the heavy metal band announced their WorldWired tour earlier this year and New Zealand was not on the list, William decided to create a petition to bring them down under.

"They are one of my favourite bands and I wasn't old enough to see them the last time they came here because I was 4, so I thought what other way than to create a petition."

Now five days in, he has already received 144 signatures and garnered the attention of the Rock Radio Station.

But ultimately, he hopes it will catch the attention of the band.

"Meeting them would be pretty cool and being in the front row at the concert would be awesome too, though, I think I might get squashed."

And although his friends at Havelock North Intermediate don't share the same music, it is something the Year 7 takes in his stride.

His favourite member of the band is now dead bass guitarist, Cliff Burton, describing him as "pretty awesome".

Father, Matt Bush said William and 15-year-old brother Ben both play the guitar and thought they would give Metallica a "hurry up".

"I think it's pretty cool. I doubt they will come here, but it gives him something positive to keep his mind on it and we will see what happens.

Hawke's Bay Today contacted Metallica's publicist for comment but they did not respond.