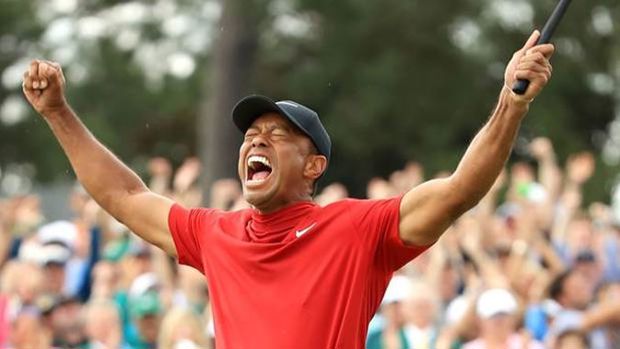 How good did it feel when Tiger Woods won the Masters last week? There wasn't a dry eye in front of my TV. Especially when he hugged his son in the exact same spot he had hugged his now deceased father 22 years earlier. What an athlete, what a comeback, what a classic example of early 40s alopecia.

Great to see Trump is giving Tiger the Presidential Medal of Freedom. New Zealand should follow suit and knight him. Better still give him a 1985 Alpha Romeo Sedan that he doesn't have to share with the rest of the team.

You're probably thinking "Dude, Tiger's not that great, he totally cheated on his wife, he fully crashed into a tree and he fell asleep in his car with five drugs in him". This is all true. But that's what makes his comeback so awesome.

The story is epic. A child prodigy who exceeded every expectation. Three career grand slams, the youngest ever to win the Masters. He was so good he became bigger than his chosen sport. On top of that, he was the ultimate family man. Leading a squeaky clean, Disneyland life with his beautiful Swedish wife and kids. He was a superhero. Of course, everyone secretly hated his guts. Including his fans. He was too successful. His family too perfect. He made us all look lame in comparison. Deep down we all wanted something to go wrong.

That's why it was so good in 2009 when he ran barefoot from his house, crashed his Cadillac into a row of hedges, drove over a kerb, smashed a fire hydrant and ploughed into a neighbour's oak tree. Things got even better when it turned out he had been sleeping with lots of other ladies. It was cool to see him completely humiliated at his mea culpa. Even better when he cried. How good was it when Elin took him for $100 million?

Tiger's fall from grace made us all feel a little better about ourselves. He may have been rich, good looking and once in a century talented. But none of us had cheated on our partners as many times as he had. We have all made bad decisions and lost a few bucks but not US$100 million.

It was okay to enjoy Tiger's downfall because we all knew it would be short-lived. It was Tiger Woods after all. He was bound to sort everything out and return better than ever in a year at the most.

But golf is a funny game. In most sports, you're playing directly against another conscious being. There's someone bowling at you or tackling you or trying to get around you or punching you in the face. In golf, it's you versus a stationary ball and some nature. Which means it's actually you against yourself. Pretty hard to win the mental game when your life has collapsed and every single person in the world is judging and laughing at you. So Tiger didn't come back immediately. Instead he busted his back and legs and got addicted to painkillers. His life spiralled out of control. People who knew a lot about golf were saying he wasn't ever coming back.

That's when we started to feel guilty. Because every filthy titbit of gossip we read and watched did its little part to fuel the fire. Our petty jealousy contributed directly to the destruction of a hero.