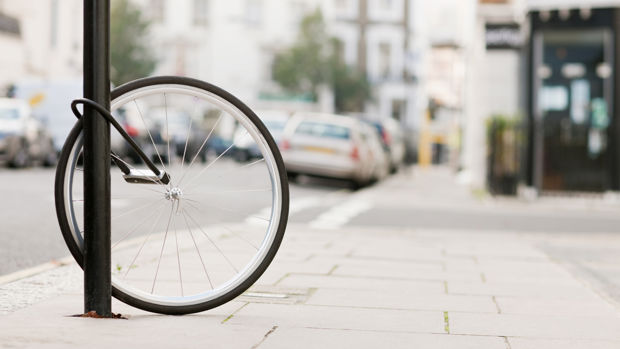 The recent theft of my bike has really affirmed my faith in humanity.

Believing that most people are good, I don't chain it up. I just ride it places and leave it outside on its own.

Two hundred and fifty days a year it sits out front of my workplace, 5am to midday, it's out there just asking to be nicked. It lasted roughly 750 days.

Add in the bars, cafes and friend's homes I've dumped it in front of and that's a lot of theft opportunities that haven't been taken up.

Stealing is obviously a lowdown, dirty thing to do. I have nothing but hate for the person who nicked my bike. I hope they fall off and break their face. Which is likely to happen.

It's rusted to hell from being left outside all the time.

I do, however, have a lot of love for the hundreds of thousands of Kiwis who have walked past my bike over the years and didn't nick it.

Ben from Ireland manages the Brewers Co-Op bar on the corner of Nelson and Victoria Sts in central Auckland. It's a great spot. Delicious beers, tasty fish and friendly service.

Anyway, it drives Ben crazy how honest and trusting New Zealanders are.

He told me the other day "New Zealanders are the only people in the world who bags tables with their phones".

What he's talking about is the very Kiwi habit of placing your phone, keys and maybe even wallet on a table at a bar before going up to the counter to order.

In most countries, all those items would be gone as soon as you turned your back. Not in New Zealand.

Here your valuables work as unbreakable territory markers. Kiwis see a wallet on a table full of cash and credit cards and think "Someone's already sitting there. Good oh and look elsewhere".

Obviously, there are some stink dudes in this country. Every society has its bottom feeders. I've had my house robbed before. It makes you mad.

But if you're a thief in New Zealand you're an outlier. Which is worse really.

The only other place in the world as honest as New Zealand is Japan. I was there recently.

No one was locking their bikes in Tokyo. I asked a local guy about it. He said "Only tourists steal bikes and they're easy to spot".

Every now and then a drunk European will grab a bike and go for a joy ride. They are quickly apprehended because all bikes are registered and the Japanese ride in an orderly fashion.

A big fat drunk European, like me, on a bike will quickly attract the attention of the police. Something to keep in mind if you're attending the Rugby World Cup there next year.

Incidents of misbehaviour are so rare the Japanese have a saying 'foreigner on a bike'. Which is used to describe any out of control tourist. Not just those on bikes.

A few years back a drunk British man jumped into the Imperial Palace moat. He was described as a 'foreigner on a bike' in the coverage even though he wasn't one. He was simply nude, drunk, fat, pasty and swimming.

There's some great footage on YouTube, search 'Naked Man Swims in Imperial Waters' and 'Japanese Police run in fear'. The cops surround him with long sticks and, terrified of his nakedness, gently poke him till he gets tired and falls down.

Then they led him away for a slap on the wrist. No harm done. It's a great system.

My bike is gone. It was a real beauty. We had a lot of fun together.

Instead of getting bitter I prefer to concentrate on all the wonderful Kiwis who didn't steal my bike, than the one who did. Good on you Auckland.

Having said that, if the person who stole my bike is reading this I hope the seat breaks off while you're riding.

I hope that leaves just the bare rusty pole exposed. Then I hope that pole impales you up through the back of your pants.