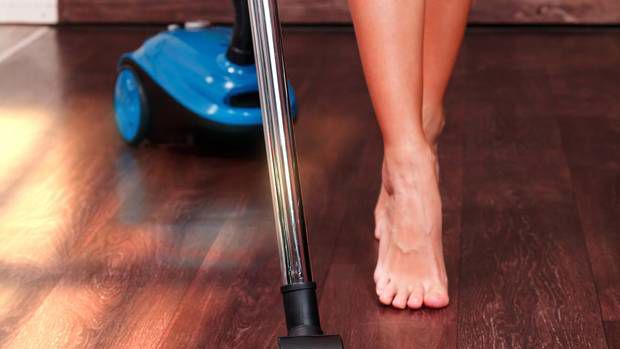 There's a nude cleaning business on the Gold Coast.

Bare All Cleaning. $90 per hour in swimwear or $149 for total nudity. Men or women. Which is pretty interesting. But what was even more amazing was local councillor Dawn Crichlow's reaction.

We humans are freaking weird. Awesome but weird. We're a bunch of mostly hairless upright walking apes who cover their bits. When we don't cover our bits people freak out.

You were born nude. Showered nude this morning. You've probably gotten romantically nude with someone else before. Yet if you went into the office nude there'd be massive problems. Why?

Studies of human body louse, as opposed to head louse, suggest humans started wearing clothes about 170,000 years ago. Nearly every human culture wears some clothes. But no animals do. (Actually sometimes my dog Colin is forced to wear a jacket but he really hates it).

Humans have been wearing clothes so long it's funny when we don't. At uni, my mate Spooge would do this naked candle dance. He would strip off, wedge a lit candle between his buttocks and dance around parties. Brilliant.

Another mate of mine, Grot, is a big fan of letting the mouse out of the house in group photos.

Every sane fun-loving person enjoys a well-timed comedy streak at the rugby or cricket.

But why is nudity sometimes funny, sometimes sexy and sometimes offensive? Is it the intent?

In 2014 a naked cyclist was ticketed by police on Timaru's High St. But not for nudity. They charged him for not wearing a helmet.

Senior Sergeant Randel Tikitiki said the man wasn't charged with indecent exposure as that would "depend on what could be seen". I think he didn't charge him because he thought it was funny.

Naked jogger Andrew Pointon was charged with offensive behaviour after a woman complained he was running near Tauranga in nothing but a pair of shoes. He was found guilty.

But he appealed to the High Court where a judge let him off saying "Pointon was a genuine naturist". In a travesty of justice a few years later Pointon was done for nude mowing. Apparently, someone was offended by it. Really?

How can you possibly get offended by nudity? We are all humans. We've all seen everything. We've all see our selves. At various times we see our parents, partners, teammates and friends in the nude.

Why do we care more if kids see others in the nude? Kids see more nudity than anyone. Most families rock around the house in various degrees of undress. Kids bath together. So what if a kid saw a man mowing his lawn in the nude. That's not offensive, it's funny.

Not that we should care if people are offended anyway. As Steven Fry once said "It's now very common to hear people say, 'I'm offended by that'. As if that gives them certain rights. It's actually nothing more than a whine. 'I find that offensive.' It has no meaning; it has no purpose; it has no reason to be respected as a phrase. 'I am offended by that.' Well, so what."

We should spend much less time worrying about whether people are offended or not. Offended people should instead harden up and shut up. It's their own problem.

On the Matt and Jerry Breakfast show last week my co-host Jeremy Wells and I decided to run a completely unscientific experiment around nudity and cleaning. We asked a young Radio Hauraki employee, Tom, to strip off, grab a vacuum cleaner and clean up The Hits breakfast studio while they were live on air. He was surprisingly keen.

But was it offensive? Not for Toni Street who commented "a tight wee buttock to be fair", Sarah Gandy was slightly less pleased "it's too early for wang".

Sam the Weatherman, on the other hand, was impressed describing Tom as "a proud man". You can watch the video online at hauraki.co.nz and make up your own mind.

So is nude cleaning wrong, wrong, wrong? Is it a disgrace? I say no. I say it's funny. I say nudity is good.

In fact I wrote this article in the nude. You may have read it in the nude. If not, you were nude under your clothes the whole time. Which is great. The more nudity the better.