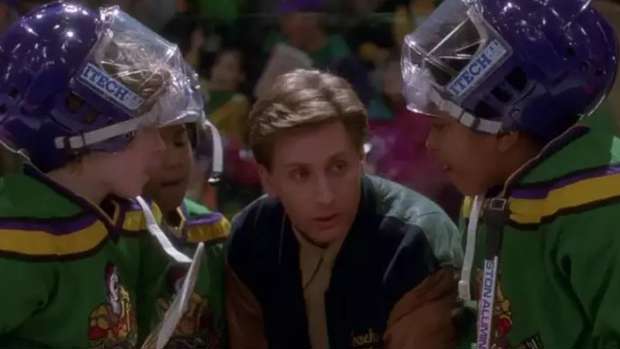 The 'Mighty Ducks' are making another comeback. The classic '90s film series is getting rebooted as a TV show on Disney+ and Emilio Estevez is rumored to be reprising his lead role. Estevez starred as children's hockey coach Gordon Bombay in the original The Mighty Ducks, which debuted in 1992, and the 1994 sequel D2: The Mighty Ducks. In the third and final installation, D3: The Mighty Ducks, Estevez only made a cameo.

According to a leaked logline for the upcoming show published by Slash Film, the new reboot will put a spin on the original underdog story. Here's the show's premise: “After getting kicked off the junior division Mighty Ducks team, a 13-year-old boy and his mom decide to start their own team, finding players, a coach, and a place to play.”

Should this leaked logline prove to be real, it would seem that the coach sought out for this new team might just be Coach Bombay. That leaves the question, though, will Coach Bombay be going up against the Mighty Ducks in this series? We'll just have to tune in to find out. There's no official launch date for the new series yet, however, production is reportedly set to begin in Vancouver this March.