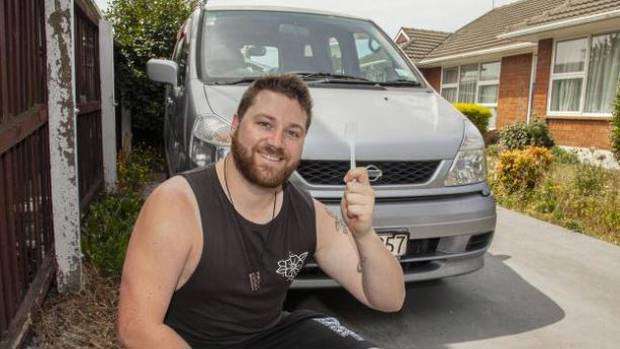 Eighteen-months-ago, Christchurch musician Tim Hunt was watching a video on how an American traded in a paperclip for a house.

Sitting on the couch beside him just happened to be a plastic fork.

Then an idea struck the 30-year-old musician – if an American turned a paperclip into a house, could he do the same with a fork?

Several trades later, he was swapping a Merida road bike for a 1999 Nissan Serena.

It was his biggest trade yet, and his eighth.

It all started with a friend, who was willing to take on the plastic fork in exchange for a book about snoring.

"I'm in a band called Stonehurst, we've been around for about 15 years. Stace is a lead singer from another band and we're quite good friends. I think he took it on and thought it might go well. He took it happily," said Mr Hunt.

The hedge trimmer was then traded in for a sound rack, which was traded for a Nintendo gaming console.

From there, Mr Hunt acquired a 32" LG TV, in exchange for the console.

The TV was then traded up for the road bike, which he sat on for a while.

"This guy (who had the road bike) was a bit down, he had a bad break up and needed a TV because he moved out of his home and I actually had a whole bunch of DVDs and CDs that I gave him as well."

"I've just been waiting for the right opportunity. The main purpose of it is bigger and better. Every time I trade I have to trade of at least equal or greater value."

He struck a good deal when he found a man willing to trade in his Nissan for the bike.

"He had been looking for a bike for a while and wanted to bike around, go to the shops etc. He has another vehicle and the van had been sitting there taking up room for a while."

Mr Hunt is now looking ahead to the next milestone, which he hopes will be property.

"I guess the next logical step is a caravan – that would be cool to go to next. It might be more difficult from now on.

"I'm just having fun. I just want to see how far it goes. I could even get a house. It will be interesting to see where it goes. People have been following it and loving it."

His advice for anyone considering doing the plastic fork game was simple: "Be patient, have a positive outlook, don't expect too much and be open to receiving."