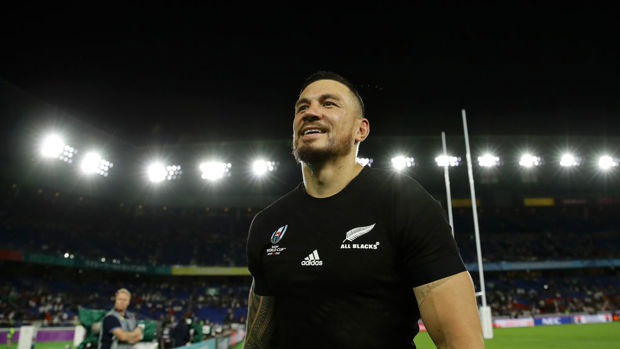 All Blacks second five-eighth Sonny Bill Willams has reportedly been offered a staggering $9.7m deal to return to rugby league after the Rugby World Cup.

The Sydney Morning Herald is reporting that the 34-year-old, who came off the bench in Saturday's World Cup semifinal defeat to England, has been offered the two-year deal to play for the Toronto Wolfpack in Europe's Super League.

The Canadian franchise is funded by Australian mining billionaire David Argyle and will make its debut in the Super League next year after winning promotion by beating Featherstone Rovers in the second division final.

His contract with New Zealand Rugby comes to an end at the conclusion of the Rugby World Cup. The All Blacks play Wales in the bronze final on Friday night which is expected to be Williams' final test for New Zealand.

The two-time World Cup winner fronted an All Blacks press conference yesterday in Japan and when asked to reveal his sporting future Williams said: "Soon bro, soon, we're just trying to finalise that."

Williams also appeared to brush off recent reports that suggested he would be joining the Sydney Roosters in a coaching capacity next year.

"Our club would want to have a name that's absolutely international that everybody would recognise and help the profile of our game, very much like David Beckham did for Major League Soccer," McDermott added.

"But he would have to be a very good player as well, he's got to be able to do the job that I want him to do. There would be no token player or just a headline-grabbing player."

While he wasn't prepared to talk about his future in yesterday's press conference, Williams offered some insight into the next All Blacks coach with Steve Hansen stepping down after the World Cup.

Williams was asked about Ian Foster's credentials and rather than endorse the All Blacks attack coach he instead opted to make a strong push for the inclusion of a Māori or Pacific Island coach within the All Blacks set-up.

Dave Rennie, a man who Williams shares close ties with after they won two Super Rugby titles at the Chiefs, has Cook Islands heritage but he is thought to be close to signing on to replace Michael Cheika at the Wallabies.

"When it comes to that there are going to be a few guys putting their heads up isn't there? By a few reports I may have to put my hand up too because I'm stepping into coaching," Williams said with a smile.

"Good luck to everyone who puts their hand up and tries to step into that role. There are a lot of coaches who will be leaving at the end of this year.

"One thing I would probably put to NZR is it would be good to see a Pacific Islander or Māori in the coaching system that would have a bit of influence because the way the game is going and is today, there's a lot of Māori and Island boys that play for the All Blacks.

"I'm just thinking how can we get a lot more out of those boys. I know there's a bit of space there for that growth."